Arsenal skipper Per Mertesacker has revealed that his priority is getting a new deal from his employers. 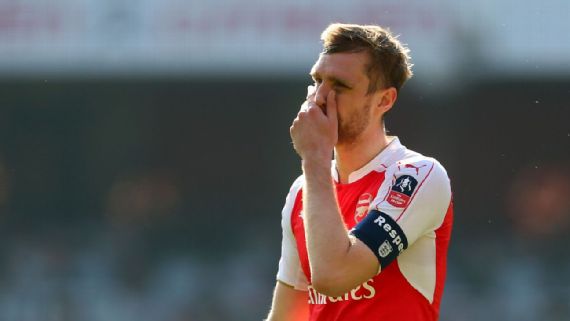 He disclosed that his immediate dream is to remain in England with Arsenal. This comes amid speculation that the player might return to Germany. The 32-year old player is in the last year of his Arsenal deal but has not featured for the London-based outfit this summer since his injury this summer. With the additions in the squad, he would find it difficult getting a starting role again despite being the captain.

“A new Arsenal contract has absolute priority for me. But no dates have been set [for talks]. Arsenal has the highest priority for me. Everything else is pure speculation, and I won’t join the discussion,” Mertesacker told Spox.

Shkodran Mustafi has partnered well with Laurent Koscielny since his arrival at the Emirates. The stability the team is enjoying might not be usurped when the German returns. This makes it difficult for the club to consider giving the player a new deal. Hannover and Werder Bremen are the leading sides chasing Mertesacker for his signature, but the player says he wants to stay put at Arsenal.

Arsene Wenger has a policy of giving 30+ players only one-year extensions. He confirmed this when he said the future of the player would be evaluated on an annual basis. Mertesacker became captain when Mikel Arteta retired this summer. The club seems to be fine in his absence and his addition might not add much, hence Wenger might prefer to offload him.

“The team has matured a bit. We played a few convincing matches, but there were also some hard-fought last minute wins,” Mertesacker said, trying to sell himself.

“The competitiveness at the top of the league is certainly unique in Europe. And it’s unmistakable the fans want the title, but it might be harder to win it in England than elsewhere,” he added.